Spurred mostly by the failure of legacy planning processes to help senior leaders anticipate and adapt to the complex and often chaotic environments of post 9-11 Afghanistan and Iraq, the US Army Combined Arms Center and its School of Advanced Military Studies (SAMS) are currently advocating for a more holistic approach to framing both operational problems and solutions, incorporated in a new planning methodology called Design. As described in the latest version of US Army Field Manual 5-0, Design borrows from complexity and systems theories to propose a new approach to informing current military planning processes such as the Joint Operational Planning Process (JOPP) and Military Decision Making Process (MDMP). In a recent Military Times article, Brigadier General Cardon of the US Army Combined Arms Center described the imperative to inject Design into legacy planning processes:

Although our Military Decision Making Process (MDMP) remains an indispensable model for the problems posed by a bipolar security environment, it fails to provide the advanced cognitive tools necessary to solve the complex, ill-structured problems common to contemporary operations. The introduction of design in FM 5-0 addresses that gap in our doctrine, while providing a sound approach to address the challenges inherent to 21st-century conflict.” [1]

Design, as defined in FM 5-0, is “a methodology for applying critical and creative thinking to understand, visualize, and describe complex, ill-structured problems and develop approaches to solve them.”[2] The name and the concept is derived from civilian applications of project design, and is considered by systems theorists to be the latest major phase of operations thinking, eclipsing prior ops research and cybernetics/open systems methodologies.[3] Although the term design is often used interchangeably to describe both a process, strategies derived from that process, and products resulting from the process, the developers of US Army Design have adopted the following description:

“America’s International Technology Education Association defines design as an iterative decision-making process that produces plans by which resources are converted into products or systems that meet human needs and wants or solve problems. According to this definition, design is iterative, meaning it does not follow a linear sequence, and it does not terminate just because a solution has been developed. Because design can be used to produce systems, not just products, and is applicable to the spectrum of human needs and wants, design is both extremely general and ubiquitous in nature.”[1]

At its core, US Army Design and civilian design methodologies seek to understand the complex system of human and nonhuman interactions within the environment, and use this insight to apply military force (or the threat of force) to physical and moral points of leverage, “nudging” the system towards favorable directions and outcomes. As described by Jamshid Gharajedaghi in Systems Thinking, “Designers seek to choose rather than predict the future, producing a design that satisfies a multitude of rational, emotional, and cultural dimensions.”[2] Thus, Design is about producing outcomes, not merely understanding how the system works.

Recognizing that there are limits to the ability of single individuals to step out of their own backgrounds and biases to look at problems from a holistic perspective, Design practitioners attempt to harness the “power of the team mind” to create better understanding of the systems they operate within. As described by Gary Klein in Sources of Power: How People Make Decisions,”This is the power of the team mind: to create new and unexpected solutions, options, and interpretations, drawing on the experience of all the team members to generate products that are beyond the capabilities of any of the individuals.”[1] Army Design teams assign three distinct, small groups of individuals (usually 5-15 members) from different backgrounds to simultaneously look at the problem, the operational environment, and at possible solutions, as shown in this diagram from FM 5-0: 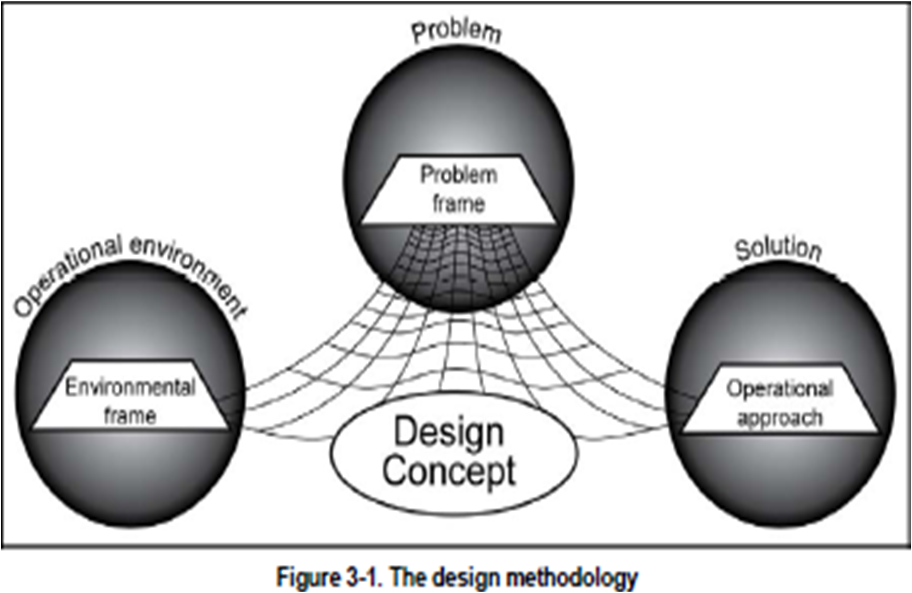 The Army Design concept is an attempt to in effect create a collective consciousness in the Design team that simultaneously looks at both the parts of the system and their relationships. In contrast, the analytical methodologies of JOPP and MDMP emphasize breaking up the whole of the system into understandable parts, but fail to emphasize recombining the understanding of parts back into a synthesis that considers the whole. Design is also intended to be an unending iterative process that stresses the most accurate initial understanding of the problem on the first iteration, known as “problem framing,” and then continually “reframing” the problem as the complex system adapts to both your actions and external stimuli.[3] Only by doing this can solutions be matched to the actual state of the environment, increasing the probability that the solutions actually address the root problems, and decreasing the chance that solutions create unforeseen, undesirable side effects that go beyond acceptable risk.

Looking at the problem, environment, and solutions separately and simultaneously in Design is an application of complexity and systems theories, which propose that understanding comes not only from examining how the parts of the system act individually, but also in observing the way the various parts interact. Design presupposes that “seeing the whole requires understanding structure, function, and process at the same time” is essential, and requires constant iteration to deal with the unpredictability of the complex adaptive systems interacting in the operational environment.[4]

Retrieved from "https://saass.fandom.com/wiki/Lyle_Design?oldid=4202"
Community content is available under CC-BY-SA unless otherwise noted.